The Commission led a discussion that included more than a dozen people interested in what the PDC plans to propose during the 2023 session of the Legislature.

The Commission also received written comments from 12 people, many of them from the people who commented at the meeting.

The Commission identified potential priorities prior to the meeting:

Lawmakers led off the discussion at the Commission meeting. Rep. Gerry Pollet talked about re-introducing his 2022 bill to improve and expedite disclosure of grassroots lobbying campaigns aimed at mobilizing the general public in an effort to pass or defeat legislation.

Under current law, he said, an interest group can engage in an extensive campaign aimed at a legislator without reporting to the PDC until after a pertinent law passes or fails in the Legislature.

Pollet also noted that the current requirement that groups report small-dollar contributions to a grassroots campaign is “an incredible burden.”

Members of groups that engage in grassroots lobbying seemed to agree.

“I talked to a lot of small nonprofits about this proposal,” said Kathy Sakahara, legislative director for the Northwest Progressive Institute. “It’s not that they want to hide (their political activity.) But the amount of time, effort and concentration required to report every minute of work, every use of office space, takes away from the work they are doing for the common good.”

Bracken Killpack, executive director of the Washington State Dental Association, said his organization is concerned about interest groups that contribute to a nonprofit to articulate a message for the interest group. He wants to ensure that those contributions are transparent.

“The current disclosure system misses a lot of detail and nuance,” he said. “It doesn’t provide meaningful information until well after (the lobbying) happens.”

Campaigns report that they have difficulty tracking down this certification for many groups. Walsh said the law as it stands could discourage small businesses and trade groups from participating in a campaign. He wants the law to change to focus on large entities and larger contributions. This would “relieve some needless administrative paperwork that isn’t helping achieve the policy goal,” he said.

Treasurers suggested that larger donors post their certification somewhere online, either on their own website or the PDC’s, where it can be viewed throughout an election cycle.

Campaign treasurer Jason Michaud said that “small (business) donors don’t understand these rules. Often they are donating to friends or family members.” He said the majority of refunds he must issue due to lack of foreign donor certification are for small contributions under $300.

Treasurer Abbot Taylor said he has also heard objections from tribal organizations that donate to campaigns but do not want to sign a declaration because they feel it could compromise their position as sovereign entities.

Much of the other comment at the meeting concerned the PDC’s proposal to adjust campaign reporting to align with the voting window that opens during the vote-by-mail period. Current reporting periods were adopted when voting took place on a single day.

Today, most voters have ballots in hand at least 18 days before election day. In the 2020 general election, more than half were returned prior to election day. Elliott said that typically at least 30 percent of ballots are returned in the first two weeks.

In 2020, PDC records show, the bulk of campaign expenditures occurred in the time between the last required monthly report in September and the report that’s filed just before the election in mid-October. During that time, the public does not have up-to-date information about campaign spending. 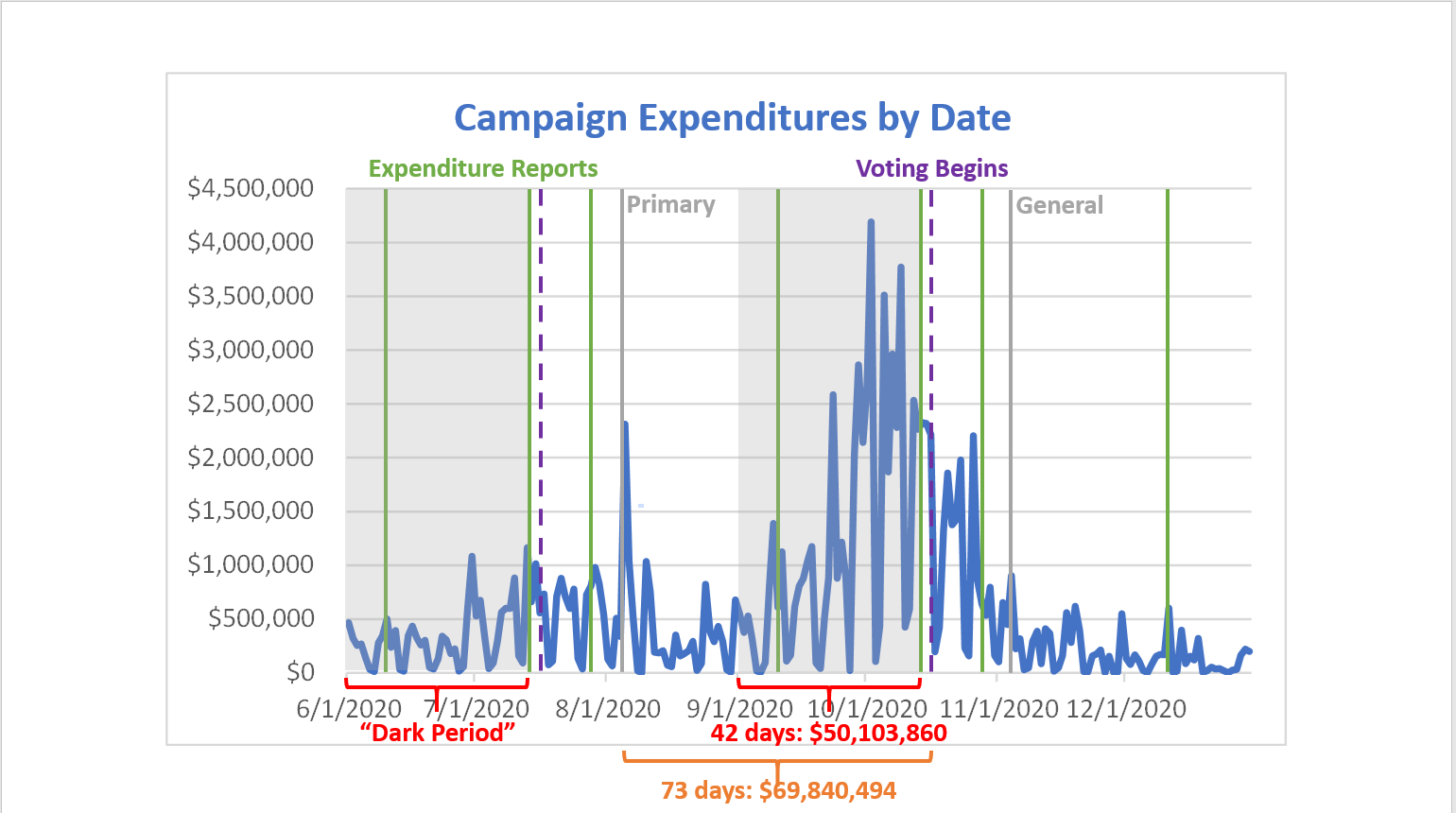 Requiring an additional report during this period would provide more timely information.

Some treasurers say it would add to their workload during a busy time right before the election but produce limited information of public interest. They argue that contribution reports, which are submitted weekly during the key period before an election, are of greater public interest.

Other treasurers commented that they would not object to one additional expenditure report, given the PDC’s proposal to extend the turnaround time for such reports from 24 to 48 hours. The Campaign Legal Center also weighed in with support for changes to the reporting schedule.

Tacoma Mayor Victoria Woodards failed to timely file an F-1 report for calendar year 2021 on time. She also had one prior violation, for failure to file a 2020 report. A $250 fine for that violation was sent to a collection agency, and Woodards told PDC staff she will contact the collection agency to pay the fine.

The Commission voted to fine Woodards $500 for the current violation, but suspend that fine if she contacts the collection agency to pay the prior $250 fine.

Jean Dillenburg, commissioner for Grant County Hospital District 4, failed to file an F-1 report for calendar year 2021. She had one prior violation, for failing to file a 2020 F-1. She paid a $250 fine for that violation but did not file the report.

The Commission voted to fine Dillenberg $1,000 for the current violation, but suspend $500 of that if both missing reports are filed within 30 days.

Layne Bladow, a trustee of Bates Technical College, failed to file an F-1 for calendar year 2021 on time, although the report was filed before the hearing.

Bladow said email correspondence from the PDC had been going to an email address that he no longer can access.

He was previously fined $250 for failing to file an F-1 for calendar year 2020. That report was filed, but the fine has not been paid. Bladow said he was unaware of the outstanding fine.

The Commission voted to impose a $250 penalty that will come due only if Bladow does not pay the old $250 fine.

Richard DeGloria, Burlington City Council member, failed to file an F-1 report for calendar year 2021. He was previously fined $250 for failing to file an F-1 for 2020. Although he paid that fine, he had not filed the 2020 report as of the hearing date.

De Gloria asked to be able to complete both reports on paper instead of electronically. He said he is resigning from the council at the end of August, and said that personal and other problems prevented him from completing the reports on time.

The Commission voted to impose a $500 fine, but suspend it if DeGloria completes both missing reports within 30 days.

Katie Rose, a member of the Bellingham School Board, failed to file an F-1 report for calendar year 2021 on time, although it was filed two days before the hearing.

She had one prior violation, for failing to file the 2020 F-1 on time. A $250 fine for that violation was sent to a collection agency for nonpayment. Rose said she was unaware of the previous fine but plans to pay as soon as possible.

The Commission voted to fine Rose $500 for the new violation, but suspend it if the previous fine is paid and the missing 2020 report is filed within 30 days.

Andrew Towle, a former commissioner for Columbia Valley Parks and Recreation, failed to file an F-1 report for calendar year 2021. He left the position as of June 1, 2021.

The Commission voted to impose a $1,000 fine, with half suspended, if all missing reports are filed and the previous fine is paid within 30 days.