Candidates and political committees may accept campaign loans.  To qualify for repayment, a monetary or in-kind loan must be:

A candidate may be repaid up to $6,000 per election for a personal loan to his or her campaign.  A commercial loan to a candidate's committee is presumed to be guaranteed by the candidate, absent clear, cogent and convincing evidence proving otherwise.

A timing provision in state law that prevents legislative, judicial (other than the Supreme Court) and local candidates as well as political committees from accepting more than $5,000 from a single source during the last 3 weeks before the general election.  This provision applies to loans that are made during that three-week period.

Terms, such as interest rate, payment intervals and amounts, and due date, are up to the lender and candidate or political committee officers.  Terms may be renegotiated during the life of the loan, upon the mutual consent of the parties.

The due date may be a date certain or a flexible date, such as "when funds are available."

A written loan agreement signed by the lender and campaign treasurer is required for each monetary loan.  The PDC recommends this format: 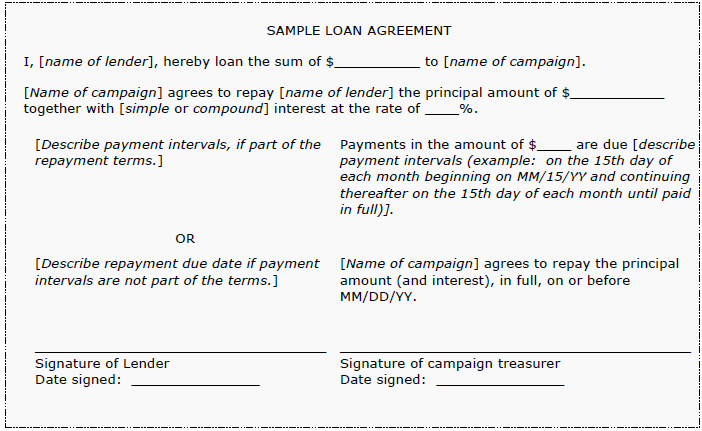 A receipt for out-of-pocket expenditures will suffice as the loan agreement for an in-kind loan, provided it contains the date the expenditure was made, the amount to be repaid, and is signed by both the campaign treasurer and spender.

Loan agreements are part of the campaign records and should be included with the books of account when making them available for inspection.

Timely and accurately report expenditures made to repay loans. Also report when a lender forgives any portion of a loan.

If a third person repays any portion of a campaign loan, that person has made an in-kind campaign contribution subject to applicable contribution limits. The loan payment-in-kind contribution must be timely and accurately reported.

A candidate or single-year campaign is allowed to carry unpaid loans forward to a future campaign. The carry forward is shown on the current committee's final C-4 report as well as the new committee's first C-4 report. Carrying a loan forward does not impact the lender's contribution limit for the new campaign.

Ideally, candidates and political committees report loans perfectly when they are received and repayments are correctly disclosed as well. The Commission understands, however, that innocent mistakes are made and a loan might be reported as a contribution - especially a loan from the candidate. The Commission has decided that a loan may be repaid if it was mistakenly reported as a contribution, provided the campaign executed a written loan agreement when the money was received.

The information contained in online instructions has been distilled from the requirements set out in RCW 42.17A and Title 390 WAC, as well as the Public Disclosure Commission's declaratory orders and interpretations. Care has been taken to make the instructions accurate and concise.  Nevertheless, the instructions cannot be substituted for the applicable laws and rules.