Party preference must be stated if the office is a partisan one. Rules govern photo size and certain descriptive terms.

Party preference must be included in any form of advertising about a candidate seeking election to a partisan office, regardless of who sponsors the ad. 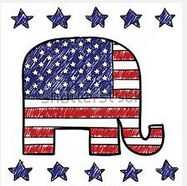 Republican:  R, GOP, Rep (use Rep only if it does not falsely imply the candidate is an incumbent State Representative)

At least one candidate photo used in the ad must have been taken in the last five years. It can be no smaller than the largest photo in the ad.