Initiative 134, approved by voters in 1992, limited how much money a contributor may give certain candidates as well as contributions that corporations, labor organizations, associations and other donors who are not individuals may give to bona fide political party and caucus campaign committees. Contributions to other types of committees are not limited, except for a restriction during the last three weeks before the general election.

Contributions to fund certain activities are exempt from limits, which means that party and caucus committees may accept unlimited amounts from any contributor earmarked for:

* When these activities are paid for with exempt funds, they cannot promote or advertise individual candidates.  RCW 42.17A.405(15).

In order not to count against a person's contribution limit to the candidates listed on it and to be paid for with exempt funds, a slate card or sample ballot must satisfy these criteria: 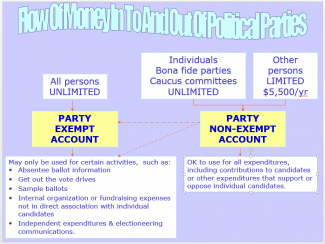 Just as the exempt and non-exempt funds are segregated, so are the records for each account.  Each account must be registered with the PDC and contribution and expenditure reports are filed for each account.  Because of the extra work involved in having both exempt and non-exempt accounts, the PDC staff's advice to legislative district and party committees is to open an exempt account only when necessary:  the committee receives more than $5,500 in a year from a contributor subject to limits or the committee receives a transfer of exempt funds from another party committee.