Donating to your own campaign

If you choose full reporting, then any money that you contribute to or spend on your campaign must be reported even if you accept no donations from anyone else.

There are several scenarios:

This series of 5 filer tips walks you through how to enter each of these transactions using ORCA software.

Open the ORCA campaign, and click on Transactions, then Loans, then Cash Loan. Fill out this screen: 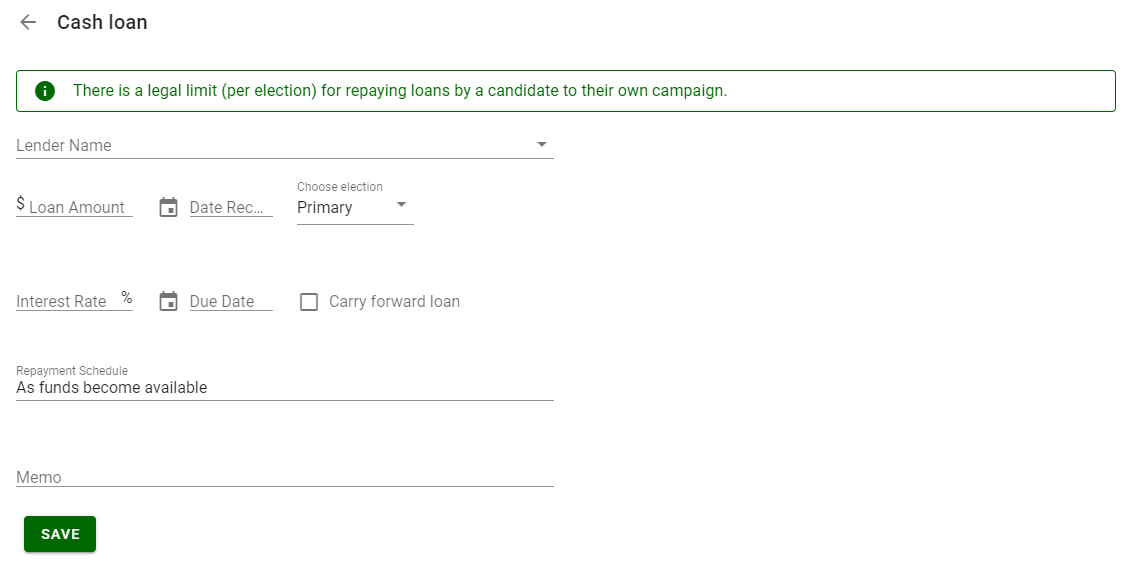 Interest rate and due date are optional. Leave the repayment schedule as "As funds become available," unless there's a different arrangement.

Don't click the Carry Forward loan box – that box is for loans that you've carried forward from a previous campaign.

Remember that monetary contributions (not loans) can be refunded to other donors, but not to the candidate. If the candidate spends money on the campaign, that's entered in a different way, described below.

The campaign can reimburse the candidate for a purchase made for the campaign within 21 days of the purchase. This does not have to be treated as a loan, and it doesn't count towards the loan repayment limit.

If the candidate will be repaid within 21 days, you don't have to enter the expenditure into ORCA until repayment is made. To enter it, click on Monetary Expenditures, the top option under Expenditures.

Click the Vendor Paid field. A list of contacts will come up, and the top one should be the candidate, with a symbol off to the right to indicate that it’s the candidate. Click on the candidate to select that contact.

If you pay the candidate back for buying things in different categories, make an entry for one category and enter how much you reimbursed the candidate for that. Then click the Add More Expenses button and enter the account, amount, and description of something else the candidate was reimbursed for.

If you buy something for your campaign and can't be reimbursed within 21 days, but would like to have the option to be repaid when funds become available, treat the purchase as an in-kind loan by the candidate.

In ORCA, click on In-Kind Loan in the Loans and Debt section. Enter the candidate's name by entering the beginning of the name and letting ORCA fill in the rest. If ORCA prompts you for the candidate's address, stop and try again. 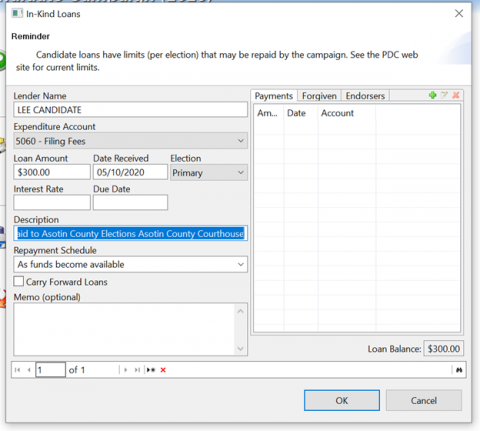 Pick Primary if the expenditure was made before the primary and the candidate will be on the primary ballot; otherwise pick General. Interest rate and due date are optional.

In the Description field, type in the item purchased, the name of the vendor and vendor address. If it was printed material, include what kind of document and how many were purchased. The Repayment Schedule automatically says "As funds become available." Leave it, unless there is another arrangement.

If someone other than the candidate buys something for the election campaign, you may reimburse them after more than 21 days without reporting it as an in-kind loan.

Scenario 5: Spend your own money on your campaign; no reimbursement

Examples: A self-funded campaign that doesn't accept contributions, or a campaign has already reached the $6,000 limit and can't pay back any more loans to the candidate.

Enter this as a contribution by the candidate to their own campaign. 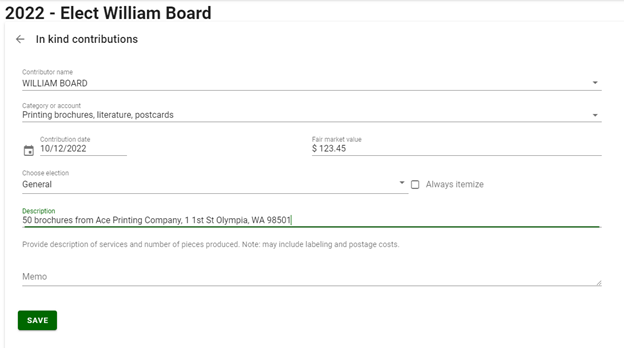 Click on Contributor Name. A list of contacts should come up. The candidate's name will be the top one, with a symbol to the right of it. Click that name to select it.